skip to main | skip to sidebar

The Will of the Divine!

Well, the will of the gods is definitely confusing, indeed! It was only a couple of months ago when I was absolutely convinced that my time as a writer had run it's course. And then, out of nowhere, I received a message from the other side that I had to complete yet another project. It was a message that carried with it utmost urgency, so I was in no way able to decline.

Needless to say that this new project is part three of my previous two novels 'The Goblin Tales'. Now honestly, I did have plans to eventually write this conclusion, but I must admit that it very well could have been years from now. The process so far has been very smooth which is a lot more than I can say about any of my previous works. I've actually completed almost fifty pages within a little over one month's time.

As far as having any answers for such a situation, I really can't say anything. Whenever we mere mortals assume anything, it very well should be regarded as folly. This is a fact that I have slowly learned throughout the course of all my days. And after this project is completed (I've been given the deadline of March 6th of next year) I really don't know what to expect. What is clear is this: Whenever the divine expect anything out of you, it is best if you simply surrender to their will. 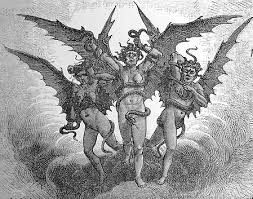 Posted by Devlin Westbrook at 2:48 PM

Devlin Westbrook
I am a horror fanatic as well as a writer. I consider my contemporary peers tame by my standards and hopefully one day, my works will set the standard! I have completed 32 short stories and have published 3 books of short stories. I have completed 3 novels, 3 novellas, and have completed two parts for a dark fantasy series. I write what I consider 'Elemental' Horror, borrowing from genre's such as Gothic, Gore, the traditional ghost story, and the Occult. Hail Horrors!!